By Hannah ZuckermanMarch 31, 2022No Comments

ISRI was among the over 20 industry and environmental groups that expressed support for the legislation to establish a pilot rural recycling program at the U.S. Environmental Protection Agency (EPA).

“The members of the Institute of Scrap Recycling Industries applaud Senator Capito’s introduction of the Recycling Infrastructure and Accessibility Act that represents the first substantial attempt to address the shortcomings of recycling for rural and underserved communities in the United States through innovative pilot projects and effective funding mechanisms to better serve these communities,” says Billy Johnson, ISRI’s chief lobbyist.

This bill focuses on addressing and improving rural recycling systems by directing EPA to provide grants for projects that make these programs more accessible for the local communities. “If you’re in a rural area you may live 40 miles away from the nearest recycling drop-off,” Johnson says. “That’s a far drive to take your aluminum cans.”

Through the pilot programs, the bill would examine how to effectively capture the recycled materials with a particular focus on hub-and-spoke recycling systems featuring transfer stations, and systems that leverage public-private partnerships. The programs will review necessary infrastructure and costs that could improve these systems including bins, trucks, and sorting/separation equipment. “This bill doesn’t look at the marketplace, we know there’s a market for these materials,” Johnson says. “Rather, it’s looking to feed the marketplace with high-quality material, and figuring out how we’re getting those materials.”

If passed, the EPA would provide grants between $1 million and $15 million for projects in rural areas. If the pilot programs go well, they’ll likely be replicated across the country.

“This bill would explore how to make it easier for rural communities to recycle. You may not have wanted to drive out 40 miles to drop off your cans, but if there was a place only two miles away, that might change things. That’s what this bill is about.”

RIAA is a companion bill to the Recycling and Compositing Accountability Act, which was also introduced March 3. The RCAA would require the EPA to collect and distribute data on recycling and composting rates across the country including materials recovery facilities (MRFs) and curbside collection programs.

Beyond those actions, this bill lays out ISRI’s definitions of recycling, recyclable materials, recycling facility, and processing. “These terms have never been properly defined in a law or regulation before,” Johnson says. “This would finally put everyone on the same page.”

The introduction of and support for these bills signal a growing awareness of the vital role recycling plays in issues like sustainability, the circular economy, and the environment. Last year saw the passage of the RECYCLE Act as part of the INVEST in America Act, and these two bills will confront the issue of residential recycling. “People are now looking to recycling as one of the solutions to issues like ocean pollution, climate change, improving manufacturing efficiencies, and saving energy,” Johnson says. “Recycling is sitting in the middle of all of it. It’s like lighting in a bottle for us. We’re in a unique time for recycling and hope to take advantage of it.”

Hannah is a Writer & Editor for ISRI's Scrap News. She's interested in a wide range of topics in the recycling industry and is always eager to learn more. She graduated from Bryn Mawr College, where she majored in History and a minored in Creative Writing. She lives in Arlington, Virginia with her husband. 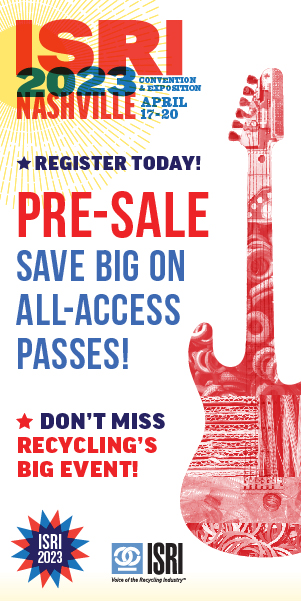 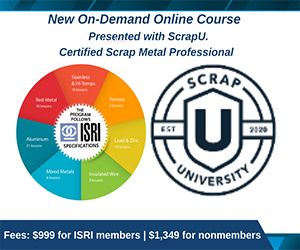