By Hannah ZuckermanAugust 10, 2021No Comments

On Aug. 10, the U.S. Senate passed the bipartisan INVEST Act on a 69-30 vote. The $1 trillion infrastructure bill aims to fix and upgrade the nation’s roads and bridges, freight and passenger rail, and communications systems, and to invest in environmentally sustainable energy. Within its 2,700 pages lie several important components that could impact the recycling industry.

The $75 million RECYCLE Act, $150 million for critical mineral and battery recycling, and $100 million for the Environmental Protection Agency’s pollution-prevention program are key takeaways for ISRI members.

The RECYCLE (Recycling Enhancements to Collection and Yield through Consumer Learning and Education) Act would authorize a $15 million annual grants program at the EPA to help educate consumers about residential and community recycling. It aims to help decrease contamination in the recycling stream and support recycling infrastructure.

ISRI took the lead on developing the RECYCLE Act, working with Sen. Rob Portman, R-Ohio. “The idea was to fix the problem before it happens,” says Billy Johnson, ISRI’s chief lobbyist, who was one of the architects of the act. “If the recycler receives good material at the start it’s easier to get a higher value and better commodity.”

The RECYCLE Act would require the EPA to develop a model recycling program toolkit to improve recycling rates and decrease contamination in the recycling stream. The bill also specifies the EPA must frequently review and revise, if appropriate, its Comprehensive Procurement Guidelines, which designate products containing recycled materials and provides recommended practices for federal agencies to buy those products.

The infrastructure spending package also includes provisions for battery research, voluntary labeling, and how to properly recycle lithium-ion batteries, while providing advisories for worker protections. “The public is becoming more aware of the problem these batteries pose to the recycling industry,” Johnson says. “Hopefully this provision will lead to some good solutions for the safe collection, handling and recyclability of lithium-ion batteries.”

There’s also $100 million allocated for the EPA pollution-prevention program, in which the EPA provides grants to private entities that want to tackle pollution. “I think this is something recyclers ought to keep an eye on,” Johnson says. It may be an opportunity for recyclers to ask for a grant to improve their facility by installing a stormwater system or something that would prevent pollution. “These are generally going to be small things, but small things add up,” he adds.

There’s $3.5 billion available for five years for the remedial account within the Superfund. The EPA would invest in cleanups and move forward on remedial actions for Superfund sites. “These are neighborhoods and areas harmed by pollution, and this is a way to clean those areas up quickly and efficiently, and it improves the lives of a lot of people by making these changes,” Johnson says.

The bill will make its way to the House of Representatives for consideration. Meanwhile there is also a separate $3.5 trillion budget reconciliation package that could complicate the final passage of the bipartisan infrastructure package. ISRI is tracking the progress of the bill and will update members to any changes.

“The RECYCLE Act presents the most effective solutions toward addressing the contamination issues surrounding residential recycling through public education and awareness of what to put in the bin—and just as important, what not to put in the recycling bin,” Johnson says.

Hannah is a Writer & Editor for ISRI's Scrap News. She's interested in a wide range of topics in the recycling industry and is always eager to learn more. She graduated from Bryn Mawr College, where she majored in History and a minored in Creative Writing. She lives in Arlington, Virginia with her husband. 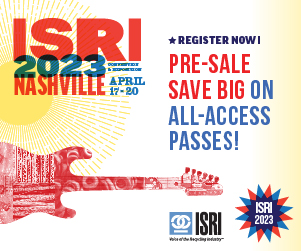